Palm was once a major player (and even a leader in some regards) in everything related to handheld computing (or should I say "palm" computing). They had the majority of the PDA market with their Tungsten line and was a success with their Treo line. This was early in the last decade tough, and a lot has happened since then. 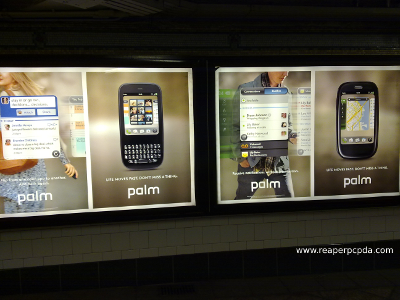 Windows Mobile had cornered the market with stand alone PDAs as Palm OS 5 became increasingly dated by the middle of the decade. In the smartphone space alternatives such as Windows Mobile, Symbian S60 3rd edition and Symbian UIQ made the single tasking Palm OS 5 seem like a dinosaur. What made matters even worse was that their PDA sales were dropping rapidly as the market shrank and Windows Mobile conquered what was left and without a clear upgrade path from Palm OS 5, they had to resort to putting Windows Mobile on the highend devices in their Treo line. By the time the iphone came around and smashed most of the competition in the North American smartphone market, Palm's home market, they were relying on the only a few devices. These were the, popular and cheap, Palm Centro(Palm OS 5) and a couple of Treo devices running Windows Mobile.

At this point not many considered Palm to be a serious contender in the mobile space anymore. However Palm faithful had held out hope for a comeback. Rumors of a new OS in the works as well as a new device kept the Palm faithful going. Then Palm after a long while of keep quite, released the Palm Pre along with their new OS: WebOS

It appeared as though they were back to competitive status on both OS and hardware fronts. WebOS was a huge leap forward compared to the Palm OS they used to run, and the Pre appeared to be a modern sliding adaptation of the Treo line. All was not well however. A few months after the device launched on Sprint, many were wondering what had happened. The device seemed to have had little to no market penetration and the marketing missteps were not helping.

Fast forward to today and the device is now on Verizon as well as the Palm Pre Plus and even has its cheaper sibling, the Palm Pixi, along with it. Even with all of this, the OS and the devices are not moving as many would hope. So what went wrong?

It is probably not any one thing, but most likely a combination various things. Blame can easily be pointed at minor hardware issues at launch, poor application store launch, extremely limited initial SDK, bad marketing, and odd initial pricing on Sprint.

Is all hope lost?

Probably not. Verizon is now selling the Palm Pre Plus at under $100 on their current sale which should move some units. Also, the GSM version of the device will soon be coming to a few carriers. This will give the device more of a global audience to reach out to.

I say not yet. They probably have another hardware generation left in them to get things going. They are already pointed in the right direction. They just need a little momentum to get going forward.

There are also the growing rumors of Palm looking to be bought by a larger company growing. This could change things entirely. If they get dissolved by their buyer then all is lost, however if the buyer puts money behind promoting and pushing Palm further then it is a win/win situation.

Leave your thoughts in the comments below.